The Resident Coordinator (RC) system’s role in country is to bring together the different UN agencies to improve the efficiency and effectiveness of operational activities at the country level.

The RC leads the UN country team. His role is pivotal for the success of the United Nations in reaching the Sustainble Development Goals and the 2030 Agenda. The Resident Coordinator leads and strategically positions the United Nations Country Team (UNCT) to address people's needs and vulnerabilities, to help achieve the Sustainable Development Goals and Leave No One Behind.

The RC system encompasses all organisations of the United Nations system dealing with operational activities for development, regardless of their formal presence in the country. The RC system is supported in UNHQ by the UN Development Coordination Office (UNDCO).

In countries facing a humanitarian crisis, like Syria, the Humanitarian Country Team (HCT) brings together all humanitarian actors including UN organisations and International NGOs, in addition to representatives of National NGOs, SARC, IFRC, and the sector coordinators and ICRC as observers, to ensure their full participation in the decision-making process concerning the humanitarian response.

Mr. Benlamlih brings more than 34 years of experience at professional and executive levels in development and humanitarian leadership and management in 12 different countries in Africa, Asia, Latin America, Arab Region, and New York. He started his career in UNDP and held several UN senior leadership positions, including as Deputy Special Representative of UN Secretary-General (DSRSG) in Haiti, and UN Resident Coordinator and UNDP Resident Representative, and Humanitarian Coordinator in Cote d Ivoire, Indonesia,  Egypt, Sudan, and Haiti, in addition to UN Resident Coordinator and UNDP Resident Representative in Kuwait and Saudi Arabia.

During his career, he led successful efforts to build strong UN teams and effective partnerships with a wide range of stakeholders. In his last assignment as DSRSG/RC/HC a.i., he led MINUSTAH exit strategy and shifted the UN focus from crisis response to resilience. In leading UN operations, he motivated large UN teams in support of global and national priorities under different contexts. These experiences involved various levels and combinations of humanitarian, security, development, climate change, human rights and conflict and crisis management situations across different UN pillars. 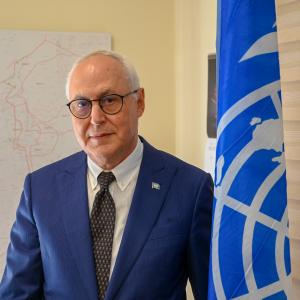